In the latest False Flag Weekly News (around 46’) Cat McGuire and I discussed an op-ed published by The Hill depicting Russian president Vladimir Putin as a New World Order conspiracy theorist. The writer, Yulia Latynina, asks:

Whу in God’s name are Russian lawmakers so agitated about gay marriages during a bloody war? Do they have nothing else to discuss? How is “gay propaganda” related to war with Ukraine?

She answers her own question by claiming that Putin’s friends and advisors the Kovalchuk brothers assert that gay propaganda is “all a part of a dastardly plan…by Western elites to stop the natural propagation of humanity.” Mikhail Kovalchuk, and by extension Putin, both allegedly believe that the Western transhumanist oligarchs want to divorce sex from reproduction and breed gene-edited humans “like chickens” in artificial incubators. According to the Russian president and his friend, the Davos-Bilderberg billionaire ruling class will artificially reproduce themselves as a genetically-enhanced elite, while simultaneously breeding a robotic slave caste of docile servants.

Since free and sovereign nations like Russia, China, and Iran are pushing back against this New World Order plan, they have been targeted for extermination via bioweapons—or so Putin and Kovalchuk believe, according to the author. “A COVID with a 100 percent mortality will come to them and cut down everybody,” Kovalchuk says, adding that the real purpose of the NWO-controlled World Health Organization and the vaccines it pushes is not to cure people but to control them. 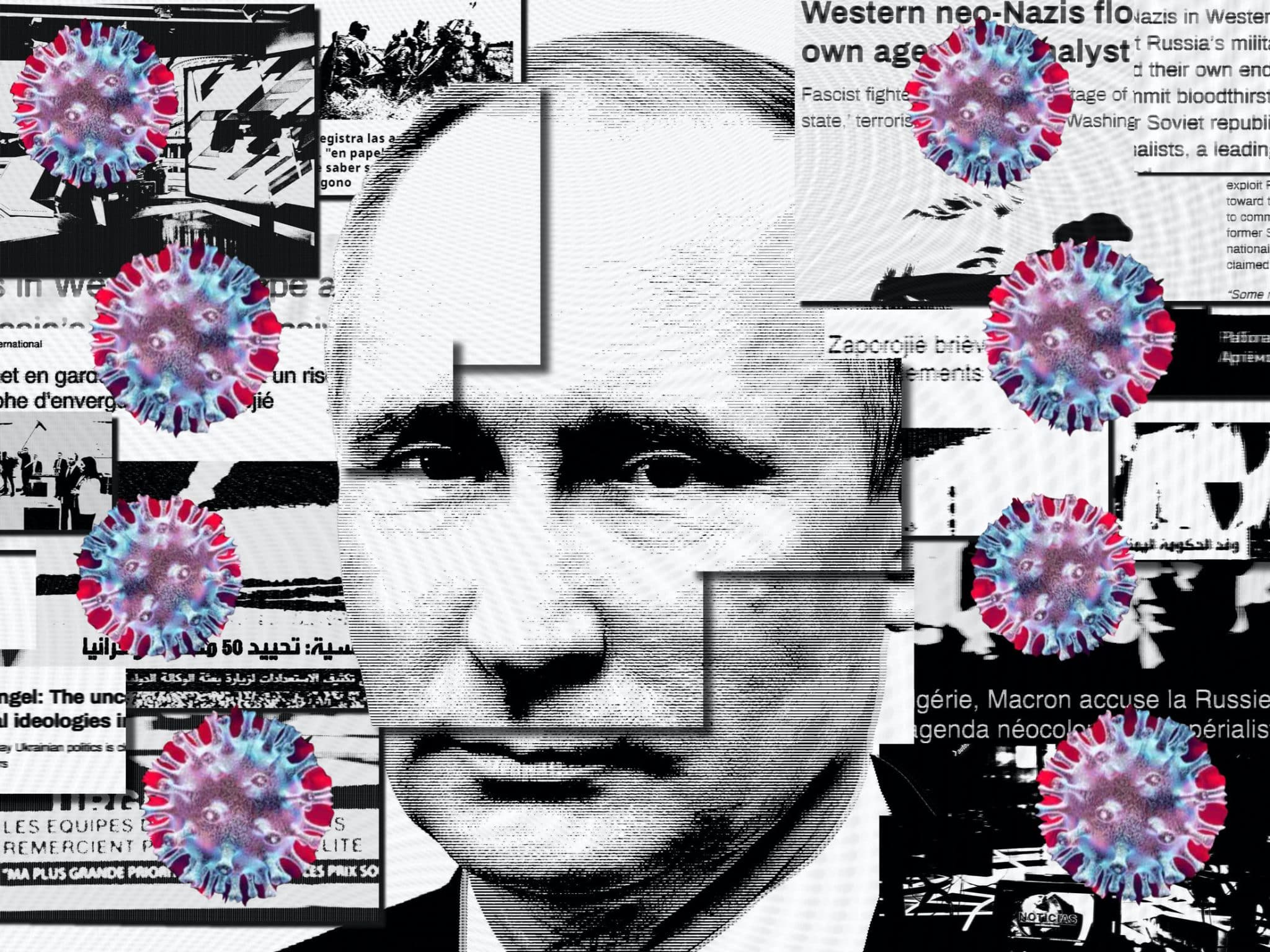 Latynina, no coincidence theorist herself, writes:

It’s no coincidence that as early as 2017 Putin started to talk publicly about the “genetic material of Russian people” being collected and exported abroad, presumably with the pernicious intent of creating a biologically selective bioweapon, to strike only Russians. (How such a weapon could be developed by Ukrainians, which are, according to Putin, the same people as Russians, beats me, but then, conspiracy theorists are not great on consistency).

“Beats me”?! Apparently, Latynina doesn’t realize that the people collecting Russian genetic material and running biowar labs in Ukraine were neocon Americans, not Ukrainians. Nor has she noticed that the US neocons, perhaps avenging their persecuted ancestors from the Pale of Settlement, are fighting Russia “to the last Ukrainian.” The neocons hate Ukrainians at least as much as they hate Russians, which is why they have orchestrated a war that will destroy Ukraine and turn millions of Ukrainians into refugees or corpses. The idea that the neocons might worry that their Russian-targeting bioweapons would also harm Ukrainians is laughable. Killing Ukrainians as well as Russians would be, in neocon biowar terms, “not a bug, but a feature.”

But according to Latynina, Putin is a paranoid lunatic:

Don’t be mistaken: This is not just a PR ploy. This is something Putin likely believes wholeheartedly, thanks to the Kovalchuks.

The public should be aware they are almost certainly not dealing with a sane person. They are dealing instead with a someone steeped in conspiracy theories, who believes he is fighting a crusade against gay marriages, genetically modified mosquitoes, and the Bilderbergs.

Gay marriages, genetically modified mosquitos, and especially Bilderbergers are admittedly annoying. Bilderbergers who marry genetically modified mosquitos of their own sex are even more annoying—and confusing since it’s the female mosquitos who are equipped with the organ of penetration. But is all of this really Putin’s major concern? More pertinently, are Putin’s and the Kovalchuks’ fears of US biological warfare—and specifically their concerns about COVID and COVID vaccines—really so crazy?

If Putin and the Kovalchuks believe mRNA vaccines are an instrument of control, not of healing, they aren’t the only ones. More than a few vaccine skeptics and freedom movement supporters think mRNA vaccines were deliberately designed to weaken immune systems, induce infertility, and perhaps even provide a means of tracking or controlling vax recipients.

But that probably isn’t what Putin and his friends are worried about. Instead, they are concerned about “a COVID with a 100 percent mortality.” (Even 50% or 10%, or 5%, if the virus were ultra-contagious, would be almost unimaginably bad.) The mRNA vaccines might control people not by disabling them or taking over their nervous systems, but by forcing them into total dependence on the vax purveyors. If the US Empire unleashed a plague and had a monopoly on the antidote, it would “win” the biowar.

The COVID-19 pandemic, which probably emerged from a US bio-attack on China and Iran, seems to have been the first shot of BioWW3. The perpetrators presumably thought that the US lead in mRNA technology would give them control of the antidote. Unfortunately for them, and fortunately for the rest of us, the vaccines haven’t worked very well: they don’t the slow transmission, their protective effect wears off quickly, and the endless boosters soon elicit diminishing returns and possible immune system damage. The failure of mRNA biowar vaccines to contain biowar COVID will likely discourage future US biological attacks, at least until the next round of ostensible antidotes is developed.

In any case, Putin has real reasons to be concerned about the dozens of American biowar labs scattered around Russia’s borders. Whatever one thinks of his opposition to transhumanist attempts to separate sexuality from reproduction, and his contempt for the Davos and Bilderberg oligarchical elites, Putin’s “conspiracy theories” about the threat of US biological attacks on his nation are obviously well-founded.