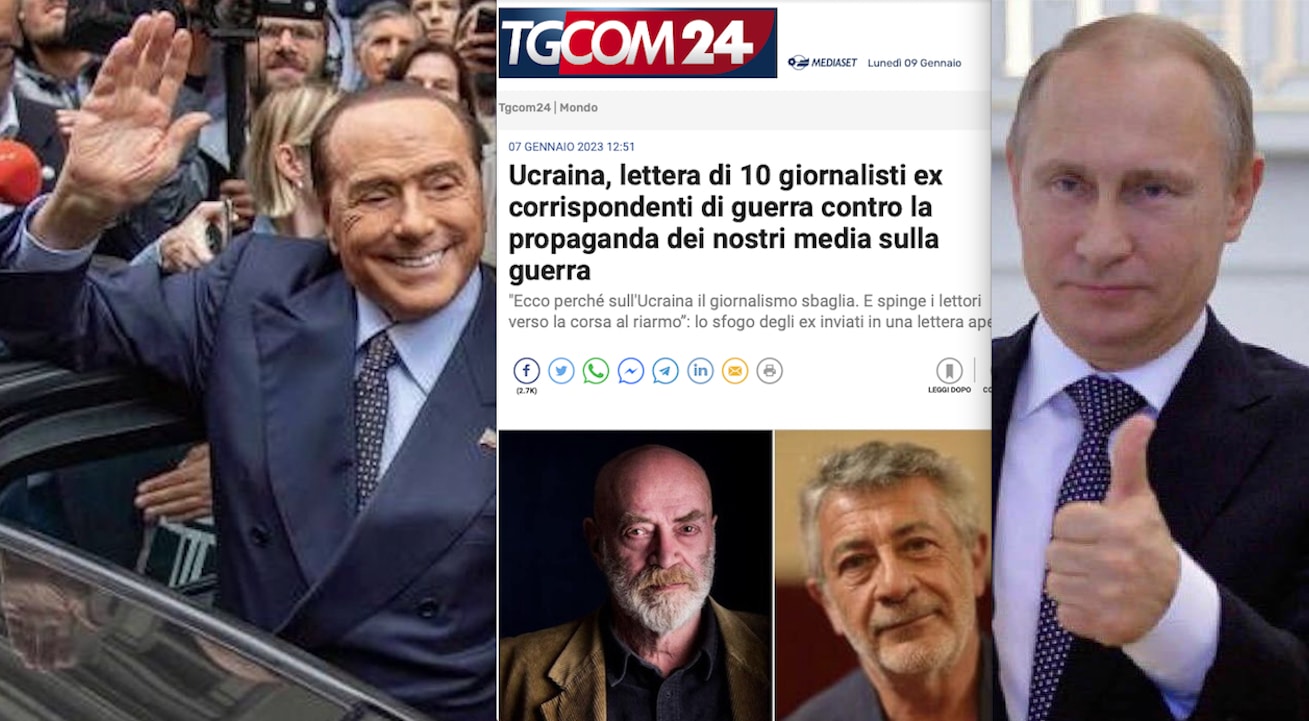 Eleven historical correspondents of major Italian media raise the alarm on the risks of the sided and hyper-simplistic narration of the conflict: “Only a dominant thought is accredited and anyone who does not think in that way is branded a friend of Putin”.

Former Corriere correspondent Massimo Alberizzi: “This is no longer information, it is propaganda. The facts are submerged by a chorus of opinions”.

Toni Capuozzo (ex TG5): “It seems that raising doubts means abandoning the Ukrainians to massacre, being traitors, cowards or deserters. Treating the issue like this means not knowing what war is”.

Thus began the public appeal of eleven historic war correspondents of the major national media (Corriere, Rai, Ansa, Tg5, Repubblica, Panorama, Sole 24 Ore), who raised the alarm on the risks of a multi-faceted and hyper-simplistic narration of the conflict in Italian journalism.

All the quoted sentences were reported by the online newspaper TGCOM24, coincidentally, on January 7, 2023, on the day of Orthodox Christmas.

“We have really seen the war from within: we have been under bombs, some of our colleagues and friends have fallen”, the journalists begin in the appeal Massimo Alberizzi, Remigio Benni, Toni Capuozzo, Renzo Cianfanelli, Cristiano Laruffa, Alberto Negri, Giovanni Porzio, Amedeo Ricucci, Claudia Svampa, Vanna Vannuccini and Angela Virdò.

“Precisely for this reason – they explain – we don’t like how the conflict in Ukraine is represented today, the first far-reaching one of the advanced web era. We are inundated with news, but in the media representation the warring parties are uncritically divided into good and bad. Indeed, very good and very bad”, note the signatories.

The war correspondents highlighted: “Only a dominant thought is credited and anyone who doesn’t think that way is branded a friend of Putin and therefore, in some way, of being co-responsible for the massacres in Ukraine. But that’s not the case. We must realize that the war moves unmentionable interests which one avoids revealing to the general public. Propaganda has only one victim: journalism”.

The news is a source of great interest in consideration of the fact that all the main Italian newspapers are now flattened on the positions of the Atlanticist government of the new premier Giorgia Meloni, considered far-right by the international left-wing media, and also known for the sympathies expressed by one of his undersecretaries against the neo-Nazi and Satanist paramilitaries of the Azov Battalion…

But it becomes even more tempting for two sensational details.

The first is that the journalists’ appeal was originally published on April 1, 2022 and was therefore relaunched by the online newspaper on the day of the Christmas holiday of Christians of the Russian Orthodox Christian Church, which recently ended up in the sights of Ukrainian president Volodymyr Zelensky which, precisely for this reason, was accused of Satanism by Moscow.

The second is that the media that published it belongs to the Mediaset group of former Italian premier Silvio Berlusconi.

The leader of Forza Italia, who returned to senator after the September elections, is known for his friendship with Russian President Vladimir Putin and for having raised controversy among Italian politicians because, in virtue of this relationship,  he offered himself as a peace mediator on the Ukraine also stating that the only way to bring Kiev to the negotiating table is to interrupt the supply of armaments.

His appeal was completely ignored by the Italian Parliament which in December extended Italy’s commitment to military aid to Ukraine for the whole of 2023, after the first supply launched by the new Defense Minister Guido Crosetto, in clear conflict of interests for his role as former president of the Italian Federation of Aerospace and Defense Industries and consultant of the sector multinational Leonardo.

Berlusconi’s appeal, for stopping weapons provision to aim for peace, was completely ignored by the Italian Parliament which in December extended the commitment to military aid for Ukraine.

Berlusconi, eliminated by judicial persecution after attempting a timid opposition against the concession of NATO bases in Italy for the attack on Libya by his friend Gaddafi, does not have the courage and the power to induce the parliamentarians of his Forza Italia party to vote against the government majority that they make up together with those of the Brothers of Italy (Meloni) and Lega (Salvini).

So here is this veiled Christmas gift of peace for his friend Putin.

Berlusconi was in fact taken out of a New World Order plot in 2011 that revolved right around the start of the gas war in a nefarious pact between then-President Giorgio Napolitano’s Italian Democrats (very close to the CIA like his successor Sergio Mattarella) and those of the USA of the Obama-Biden alliance.

In 2011 Berlusconi was forced to resign, due to judicial investigations probably triggered also with the help of the American intelligence NSA espionage activity, and was replaced by Mario Monti, point of reference of the New World Order and the link between the SARS-Cov- 2 built in the laboratory to trigger the Covid-19 pandemic and experimental vaccines for the use of graphene for the neurocerebral control of humans.

This project was initiated by the military agency of the Pentagon DARPA at the behest of Obama and then carried forward by the European Union when Donald Trump arrived at the White House by surprise.

All the details of the reporters’ appeal for peace and against weapons’ race in the Gospa News article in Italian with automatic translation in English available.