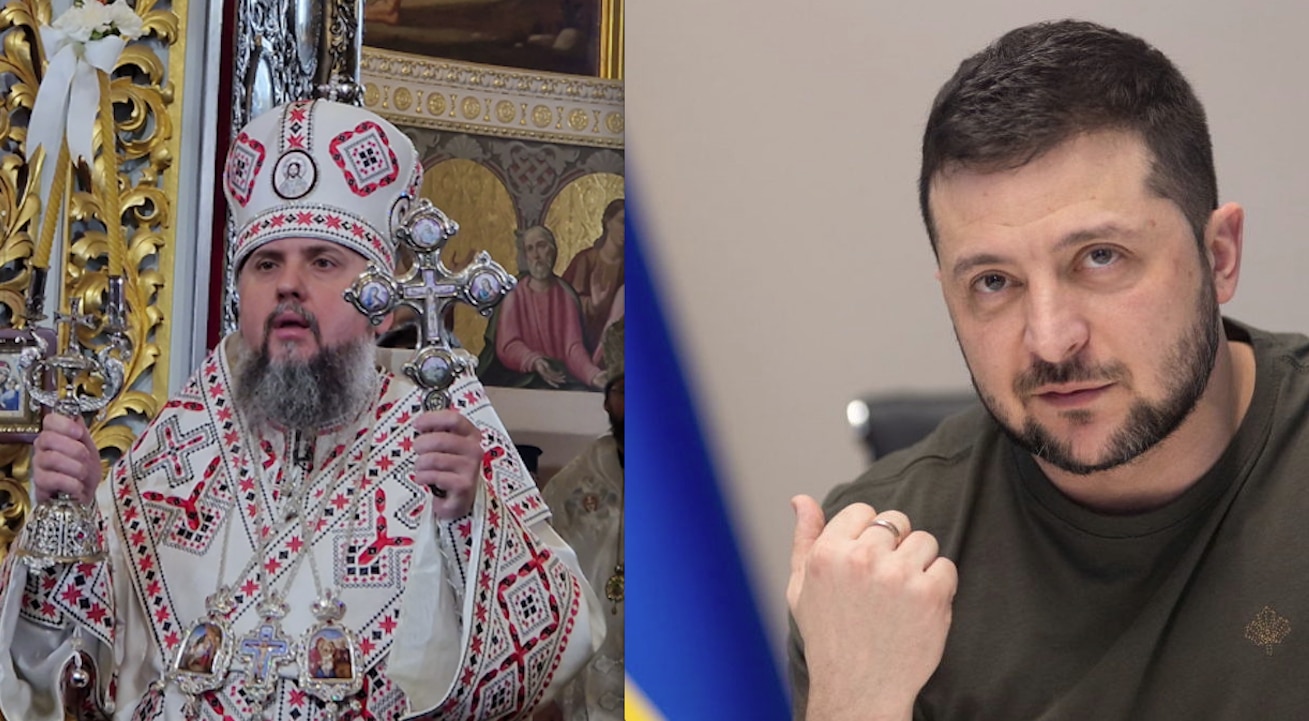 The Patriarch of the Russian Orthodox Church Kirill asked for a Christmas truce on January 7, Russian President Vladimir Putin granted it without batting an eye, Ukrainian President Volodymyr Zelensky not only refused it but also revoked the citizenship of 13 priests devotees to the Moscow Patriarchate on the day of the solemn Christian holiday with an act defined as “Satanism” by Russian diplomacy.

We have already written about this…

But a circumstance that is perhaps even more serious from a symbolic and religious point of view has gone almost unnoticed in the international media due to its early significance.

It is the Christmas desecration carried out by the head of the Ukrainian pro-Nazi regime in the most important and historic Kiev Pechersk Lavra aka Caves Monastery.

Zelensky (of Ashkenazic Jewish descent) first evicted the priests loyal to the Russian Orthodox Church by closing the structure in a blitz of a few days and then handed it over to the devout schismatic priests of the headless Orthodox branch who celebrated the Christmas Mass on January 7 flaunting the value of a “military” conquest of the famous monastic complex.

«The fake and godless spirit of the ‘Russian world’ is leaving the Kyiv-Pechersk Lavra. And the spirit of true service to Orthodoxy and the Ukrainian people is coming back» Schismatic Metropolitan Epifani, created by Kiev government, underlined during his homily.

It therefore assumes a very disturbing profile that the main Russian media (Tass, Russia Today, Sputnik) have completely ignored this episode of such unprecedented religious gravity: because it means that in Moscow, both Kirill and Putin, the new Czar of Orthodox Christianity, suffered the blow.

This raises concern because the networks close to Russia in recent months had been in abundance with details on the raids by secret agents of the Security Service of Ukraine (SBU), known to have killed, on March 5, 2022, with a shot in the back of the head and without a trial, a peace negotiator from Kiev because he is considered an accomplice of Moscow.

In the religious field we can expect some new tirade from the Patriarch of Moscow against the Zelensky government, blamed not only for the persecution of the pro-Russian people of Donbass, with repeated violations of the Minsk agreements, but also for the organization of Gay Pride.

In the military field, it is to be hoped that this will not become the right occasion for the Russian president to test some tremendously powerful ballistic missiles on the city of Kiev.

As we have explained several times today, the Orthodox Church has two metropolitans in Ukraine: the historical one Onufrij, delegated by the Moscow Patriarchate, and that of the headless schismatic church Epiphanius who proclaimed himself in this role on inspiration and with the recognition of President Peter Poroshenko before (December 15 2018) and of the Ecumenical Patriarch of Constantinople Bartholomew (5 January 2019).

In a geopolitical reading it should be remembered that the latter, at the head of the Greek Orthodox Church, has a patriarchal seat in Istanbul. Therefore it must therefore submit to the influence of the Turkish Muslim president Recep Tayyp Erdogan who has spared no persecution of the Maronite Christians in Rojava (Northeast Syria) with the oppression of the jihadists of ISIS and Al Qaeda used as mercenaries by Turkey with the approval of NATO (and of the UN…).

The pro-Russian Church UOC (Ukrainian Orthodox Church) has dozens of eparchies and 15 million faithful, the pro-Greek OCU (Orthodox Church of Ukraine) a thousand religious communities and monasteries for a number of devotees not yet estimated but that should be around a million. It is therefore absolutely a minority.

As Gospa News reported on various occasions between November and December, the persecution maneuver against pro-Russian Christian religious had been in the air for weeks after the blitz by the 007 soldiers of the Zelensky SBUwho raided the monasteries in search of Russian propaganda evidence, then declaring, of course, that he had found them…

It turned into a “real coup” with the beginning of the new year as the correspondent of the Italian Episcopal newspaper Avvenire well highlighted in a poignant article on the eviction of priests from the UOC from one day to the next.

«At the beginning of December, when President Zelensky had signed the decree opening the legislative process to ban any religious community linked to Russia, the Church led by Metropolitan Onufrij had realized that the future law would have a single addressee: the his own community» wrote the correspondent Giacomo Gambassi..

«So much so that in drawing up the balance sheet for the year, the head of the legal department, archpriest Oleksandr Bakhov, denounced the “religious policy of the government aimed at the violent migration of believers towards the Orthodox Church of Ukraine“. A way of saying that the state intends to favor the autocephalous branch, headed by Epifanij, which broke away in 2018 causing a schism in the Orthodox world».

«The reassurances of the leaders who repeat that since May the Synod has condemned the aggression, canceled from the statutes any form of connection with Moscow, sanctioned «full canonical independence» from Russia» adds the reporter.

The Assumption Cathedral and the church of Saints Anthony and Theodosius have been closed since January 1st. The Ministry of Culture announced that the concession contract would not be renewed on 31 December. The legal protests of the Ukrainian Church in Moscow centered on the fact that the extension is automatic when martial law is in force for a state of war have been of no avail.

On New Year’s Eve, the dicastery ordered the gates to be closed to prevent priests from entering and then starting the eviction of a symbolic place, a UNESCO World Heritage Site, where the seat of the metropolitan remains – at least for now.

In the KyivPost newspaper, senior editor Maryna Shashkova celebrated the event with enormous enthusiasm, also reporting the words on the conflict spoken by Metropolitan Epiphanius during the homily.

The climate of tension is soon framed by two numbers: about a thousand faithful present at the Solemn Mass in the morning compared to 3 thousand Zelensky policemen.

Amongst the people (albeit accompanied by guards) were Chairman of the Verkhovna Rada Ruslan Stefanchuk, Deputy Head of the Office of the President of Ukraine Kyrylo Tymoshenko, and Minister of Culture of Ukraine Oleksandr Tkachenko.

Kyrylo Tymoshenko, representative of the President’s Office, told Kyiv Post that this Christmas service was a historic event for Ukraine. As a sign of support for the OCU, he attended with his family.

«Ukrainians celebrated Christmas twice during the brutal war in Russia. Many celebrated December 25 according to the Gregorian calendar, with a further celebration on January 7 according to the Julian calendar» highlighted the journalist confirming the attempt of westernization imposed by the Ukrainian president in a nation where Catholic Christians are only 11%. of the inhabitants facing 64% of the Orthodox.

«On a momentous day in Ukrainian history, the Orthodox Church of Ukraine (OCU) held its first Christmas service in Kyiv-Pechersk Lavra – the largest center of Christianity in the times of Kyivan Rus – for the first time since Ukraine achieved independence in 1991» remarked Shashkova who then gave ample space to the metropolitan.

«For some 30 years, representatives of the Russian Orthodox Church – or, as they have preferred to call themselves, the Ukrainian Orthodox Church of the Moscow Patriarchate (UOC-MP) had dominated the territory of the site» she added.

In his homily, Metropolitan Epiphanius encouraged people to turn to God and to the light. «Peace does not come out of nowhere. We must follow God, but not everyone is ready to accept this light» he proclaimed.

He also mentioned Russia. «We didn’t want this war. We sought to live in peace and harmony with everyone. But the enemy broke the peace and invaded our land, spilling blood, sowing death and seeking to destroy our statehood».

He assured the congregation that the Russians will definitely be defeated, as truth is on the side of Ukraine. «We have already gained a moral victory» the head of the OCU reassured his attentive audience.

Then the senior editor of the KyivPost concludes with a preview that sounds like a threat after explaining that the Mass of the OCU was made possible by the interruption of the contract with the other Orthodox church.

«Surely enough, Pavlo Lebid – former Lavra vicar and archbishop of the UOC-MP – was opposed to this decision. But it was made clear to him: the Lavra is coming back home».

«Tkachenko (the Minister of Culture – ed) told Kyiv Post after the service that a meeting of the interdepartmental commission is scheduled for Jan. 11. It should determine whether there were any violations during the use of the historical monument. Previously, illegal construction in the Lower Lavra had been repeatedly reported. The state will soon have its say» she concluded.

Then probably other Putin missiles will have their say…

And so on ad infinitum. Until the total destruction of Ukraine and its people.

Without truce: as desired by Zelensky even at Christmas!