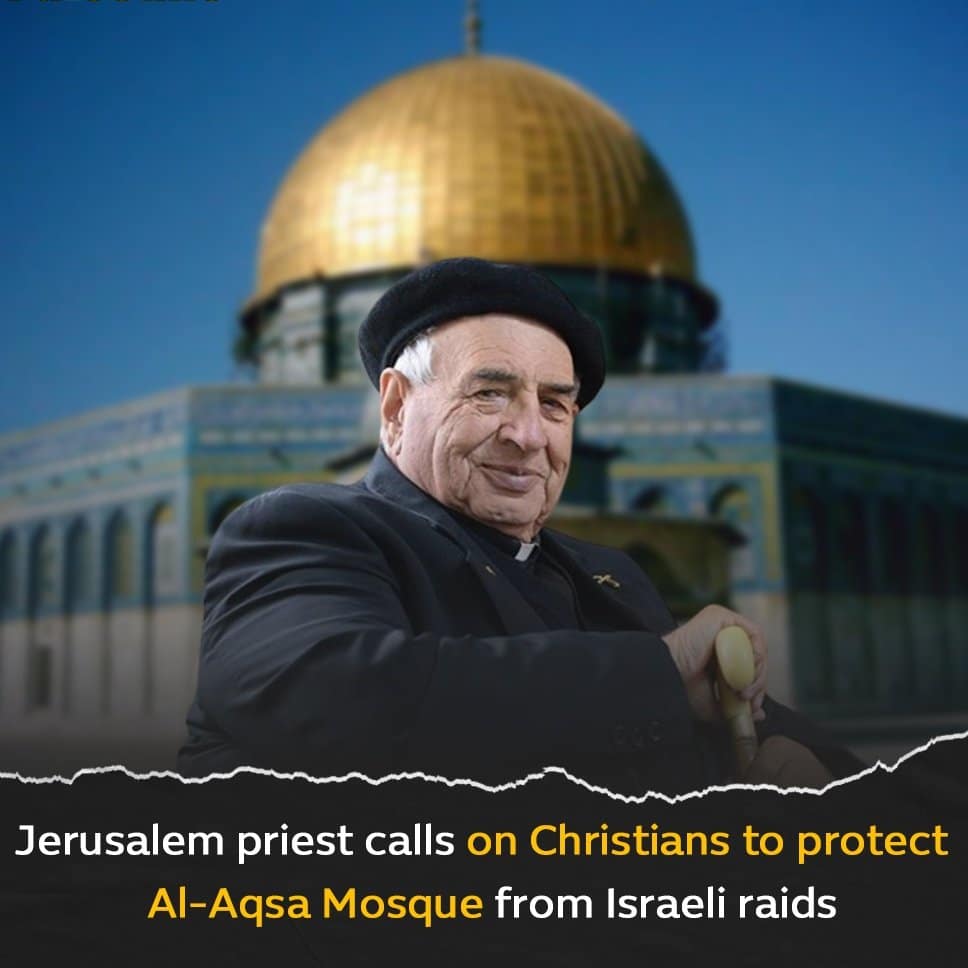 So Facebook, without warning, has suspended Fr Manuel Musallam’s account. Was it because he recently called on Christians in Jerusalem and across historic Palestine “to stand side-by-side along with Muslim brothers, defending Al-Aqsa Mosque from the Israeli aggression”?

Or because he said that “protecting Al-Aqsa Mosque means protecting the Church of Holy Sepulchre and the Church of Nativity, as well as the Islamic and Christian existence in Palestine”?

Fr Manuel retired in 2010 at the age of 71 after serving as parish priest of the Holy Family Church in Gaza for 14 years. For most of that time, the Israelis wouldn’t allow him to visit his own family and friends in the West Bank, a few miles away. So, in spite of failing health, he soldiered on through the devastating siege and the murderous blitzkrieg.

But retirement hasn’t silenced him or dimmed his perceptions. He’s been busier than ever in the Palestinian cause. In 2010 I wrote a piece saying I was privileged to have met him and just loved the way the man speaks out, doesn’t mince words, and tells it the way it is, with truth and style. Back then, at Easter time he was concerned, as always, about the Occupation and how it robbed those in the Holy Land of Easter’s message of hope and joy.

“We Christians of Palestine have been under Occupation for many long years. We’ve been suffering with bitterness being kept away from the Holy Sites. We’ve been denied our right to worship in Jerusalem. Many Christian generations have never been able to reach Jerusalem to visit its holy places.

“The Occupation has been continuously imposing unlawful obstacles. This year, we are confronted by the Israeli Apartheid Separation Wall, checkpoints, and roadblocks guarded by Israeli soldiers denying us movement and access to Jerusalem.

“All these measures not only suffocate the Palestinian people but also asphyxiate peace in Israel and Palestine.”

He complained about how Palestinians were denied the freedom to worship as and where they pleased, even at Easter. In particular, they were prevented from going into Jerusalem. The Zionists claimed Palestine was ‘a land without a people for a people without a land’. “It does not mean that Jerusalem is without a people, but rather it should be evacuated to be handed over to another people. David Ben Gurion himself articulated the plan in 1937 when he declared: ‘We must expel Arabs and take their places.’ 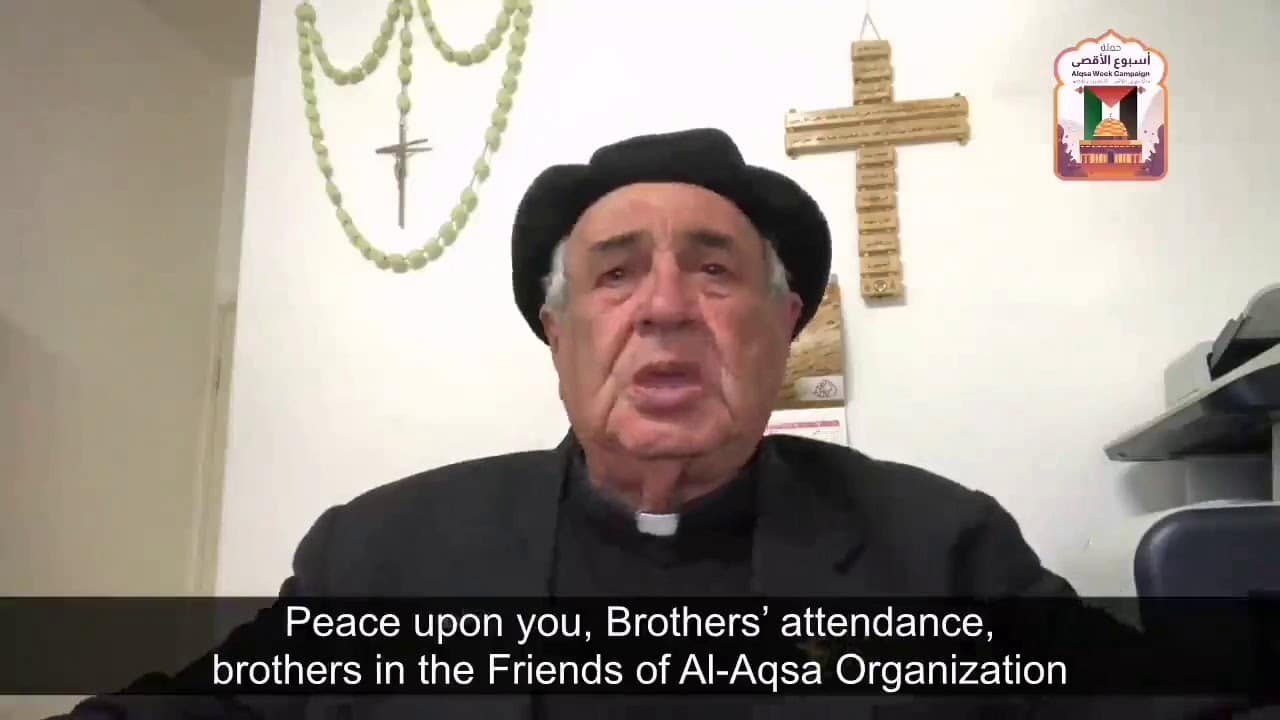 “Every stone built in the Apartheid Wall, every axe strike digging under the Al-Aqsa Mosque and every house destroyed by Israel will increase the intensity of resistance and resentfulness….” He warned of the relentless Zionist program to completely Judaise Jerusalem, alter its features, expel its people, destroy its houses, seize its land and build numerous settlements. “We lament Jerusalem, and miss its beautiful ceremonies.”

Easter symbolizes liberation from sin and slavery but hopes of national liberation were evaporating. The slavery and humiliation of occupation were felt more keenly than ever by Palestinian Christians.

“We do not foresee any political settlement, or an end to the occupation, or hope for the return of Palestinian refugees, or the forming of our state with Jerusalem as its capital, or the right to self-determination, or the liberation of thousands of prisoners, free access and movement, an end to Gaza siege, and the dismantling of the Apartheid Wall around Jerusalem.

“We are appalled by the continuous threats of more war. And we are distressed by the daily humiliation, hunger, thirst, unemployment, and the absence of sustainable development in our country.” The world’s silence was perplexing, he said, and the international community seemed unable to implement the resolutions it used to create the State of Israel. Events only led closer to the abyss. 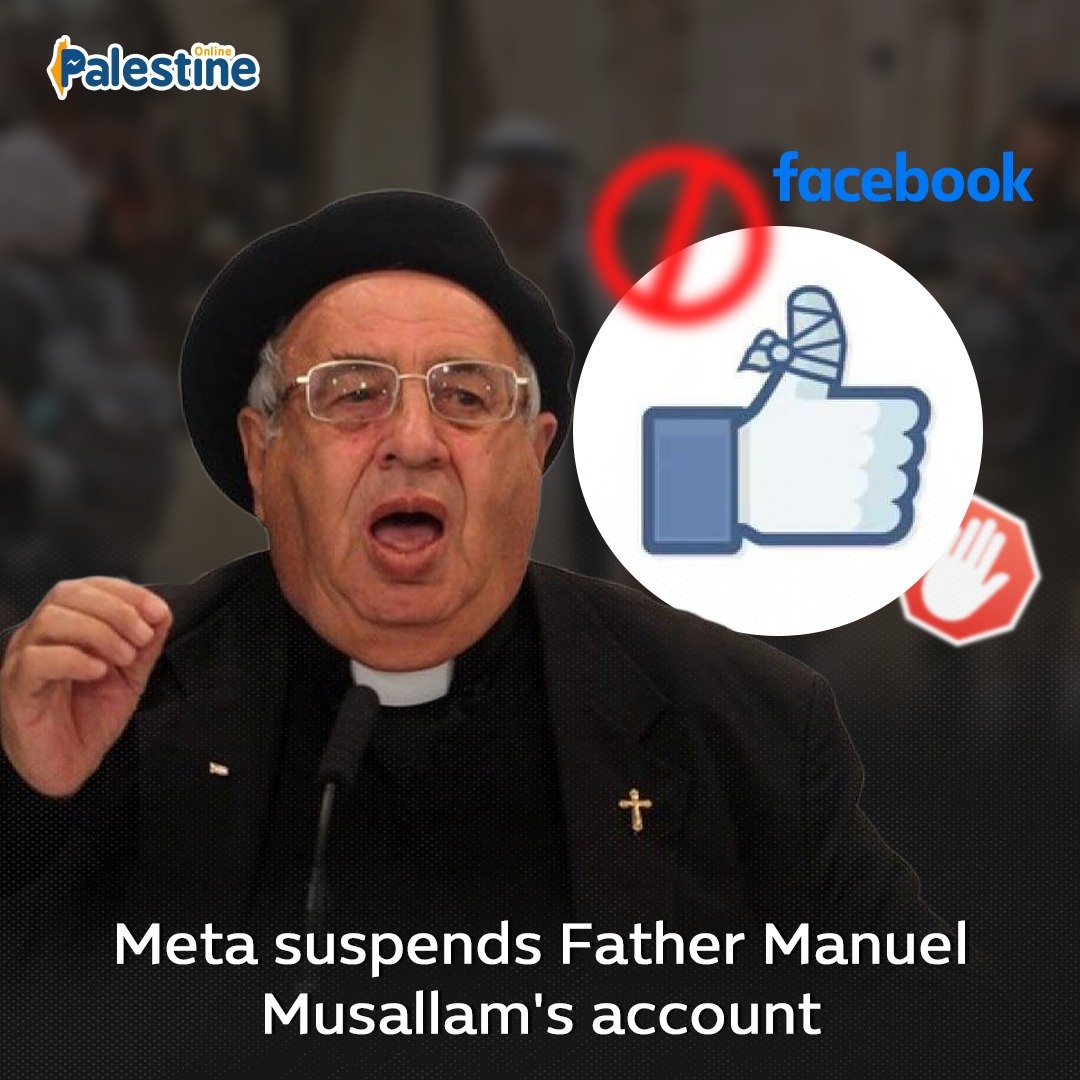 ‘Jerusalem is ours. It is not a disputed land’

He reminded us that Palestinians had been building and enhancing Jerusalem for 5000 years and never stopped… except during the Occupation, which had practically destroyed everything that was accomplished. Unable to find any traces of their own heritage, the Occupiers had annexed some of the Palestinians’ holy places. “Jerusalem was the city of God, peace, and prayer but has been converted into a city of man, war and hatred. Instead of becoming the key to the doors of heaven, it has become a key to war and blood.”

Jerusalem, the holiest place on earth, is now the focus of sin and crime, he says, because one man is killing another, insulting him and trampling his dignity and his right to live. “Jerusalem is ours. It is not a disputed land. We are not soliciting to share the legacy and heritage of Jerusalem with Israel or with anyone else.

“Jerusalem, instead of becoming the key to the doors of heaven, has become a key to war and blood.”

He didn’t accept the claim by Israeli leaders that Jerusalem is the capital of Israel and that building in it is no different from building in Tel Aviv. “Occupation is a sin and a form of terrorism, and when relying on the texts of the Torah to kill people or expel and remove them from their land it rises to the level of a crime against humanity. All perpetrators should be judged by the International Criminal Court before being judged by the just court of God.” And those who fail to condemn Israel become accomplices.

Supporters of Netanyahu’s remarks, and those who fail to condemn them, simply give Israel more time and excuses to intensify its crimes against the Palestinian people. Hence they become accomplices in a “sin against the nations”.

In his appeal to the world that Easter, he said: “Israel has devastated and tortured us in their many wars. We ask you to see the wounds of innocent Palestinian people and to be compassionate towards the Palestinian holocaust that you witness with your own eyes and touch with your own hands, and to know those who perpetrated this crime against our children. Search with us for justice that is the mother of peace. Protect us and safeguard our Holy Sites.”

‘Our love for God is in intensive care’

In 2008 Fr Manuel was with his Christian community during their darkest hour when Israel, with a nod from America and the EU, unleashed a deadly onslaught intended to finally crush the half-starved Gazans. At the height of the killing spree, Fr Manuel sent this message from the smoking ruins to anyone who would listen: “Our people in Gaza are treated like animals in a zoo.

They eat but remain hungry, they cry, but no one wipes their tears. There is no water, no electricity, no food, only fear, terror, and blockade… Our children are living in a state of trauma and fear. They are sick from it and for other reasons such as malnutrition, poverty, and the cold… The hospitals did not have basic first aid before the war and now thousands of wounded and sick are pouring in and they are performing operations in the corridors. The situation is frightening and sad.”

In exasperation, he added: “May Christ’s compassion revive our love for God even though it is currently in ‘intensive care’.”

Wimpish churchmen and politicians in the West would wet their pants at the very thought of speaking plainly against Zionist lawlessness and cruelty the way Fr Manuel does, which is why the Holy Land is such an unholy mess. Their cowardice ensures that nothing changes for the better. Indeed, the situation gets progressively worse.

We badly need many more good and turbulent priests. They inspire. They might even succeed in goading the wobbly international community to action. Meanwhile, it seems God still has work for Fr Manuel, even in retirement.