So do everyone! This is the “motto” that unites the discovery of classified documents first in Trump’s house and then in Biden’s. Trump defended himself by saying that Obama had done it too…

If we look at the “substance” it is therefore no wonder that three presidents could have committed such a serious formal violation of the law.

If we look at the “form” the Biden subtraction represents a very serious offense to the dignity of the White House.

Precisely because the handling of this classified records has been done in a shamefully crass way… As if it were not a precious resource but instead the garbage forgotten in the garage and in the car (Corvette)!

This is well explained by the clever whistleblower Edward Snowden, now a Russian citizen, who today mocks Biden for the rough treatment of that secret material.

This is well explained below by the clever whistleblower Edward Snowden, now a Russian citizen, who today mocks Biden for the rough treatment of that secret material.

Snowden became famous for having chosen how President Barack Obama’s USA was spying on all Americans, French and the most important politicians of the European Union and other countries.

The ongoing publication of leaked documents has revealed previously unknown details of a global surveillance apparatus run by the United States’ NSA] in close cooperation with three of its four Five Eyes partners: Australia’s ASD, the UK’s GCHQ, and Canada’s CSEC.

The initial reports included details about NSA call database, Boundless Informant, and of a secret court order requiring Verizon to hand the NSA millions of Americans’ phone records daily, the surveillance of French citizens’ phone and Internet records, and those of “high-profile individuals from the world of business or politics.

Hur, now a lawyer at a Washington, D.C., firm, was the U.S. Attorney for Maryland during the Trump administration, and is also the former principal counselor to former Deputy Attorney General Rod Rosenstein, who oversaw the Mueller investigation.

Garland said Hur’s appointment “authorizes him to investigate whether any person or entity violated the law in connection with this matter.”

In a statement, Hur said: “I will conduct the assigned investigation with fair, impartial, and dispassionate judgment. I intend to follow the facts swiftly and thoroughly, without fear or favor, and will honor the trust placed in me to perform this service.”

The move came after the White House acknowledged publicly on Thursday that classified Obama administration documents were found in one of Biden’s Delaware homes. This came after confirming Monday that documents had been found in a Washington office.

Garland said the DOJ was told about the documents in Biden’s home on Dec. 20. Biden’s lawyer informed the Justice Department on Thursday morning that one other document had been found in the home, Garland said.

In a statement released Thursday, Richard Sauber, a counsel to Biden, said the additional documents were found during a search of Biden’s two Delaware homes. He did not say how many there were or their level of classification.

Sauber said the president’s lawyers have now completed searches of “locations where files from his Vice-Presidential office might have been shipped in the course of the 2017 transition.”

‘Even I handled classified documents better’ – Snowden on Biden scandal

After a second batch of classified documents linked to US President Joe Biden was discovered – this time in his Delaware garage – NSA whistleblower Edward Snowden weighed in on the controversy again, noting that he used to handle such materials more securely.

“Wow, even I handled classified documents more securely. At least I kept them encrypted! ”Snowden tweeted on Thursday, referencing a New York Times article about the new Biden revelations.

The former CIA and National Security Agency contractor was referring to his 2013 decision to blow the whistle on the NSA’s warrantless surveillance of Americans. The US government responded by charging him with theft of government property and giving classified information to unauthorized persons, among other things. Washington also revoked Snowden’s passport, stranding him in Russia, where he eventually received political asylum.

“Man, I should have thought of that one,” Snowden quipped later on Thursday, commenting on the statement by White House press secretary Karine Jean-Pierre that the Biden documents had been “inadvertently misplaced.” 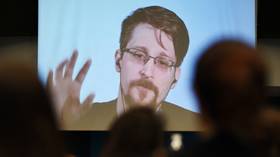 The documents date back to Biden’s term as Barack Obama’s vice president. The first batch was found at the University of Pennsylvania on November 2, but that information was not disclosed publicly until this week.

Snowden’s first reaction was to point to the delay, calling it the real scandal, because the US Department of Justice “found out about it a week prior to the midterm elections and chose to suppress the story, conferring a partisan advantage.”

He has also retweeted a follower who argued that no US politician really cares about classified documents, and that “the faux outrage over it is only used to punish political enemies.”

Back in August, Biden and the Democrats expressed outrage that former President Donald Trump had allegedly kept some classified documents at his Mar-a-Lago residence in Florida, after FBI agents were sent to raid the resort.

Unlike Biden, as president Trump had the authority to declassify documents. The DOJ has now appointed a special counsel to handle the investigation into Biden’s handling of the classified papers. Some Republicans have expressed suspicion that the move is intended to obstruct their investigation of the Biden White House, however.

RussiaGate Huge Plot against Trump! Acquitted after the arrest the Analyst Who Contributed to Infamous Steele Dossier