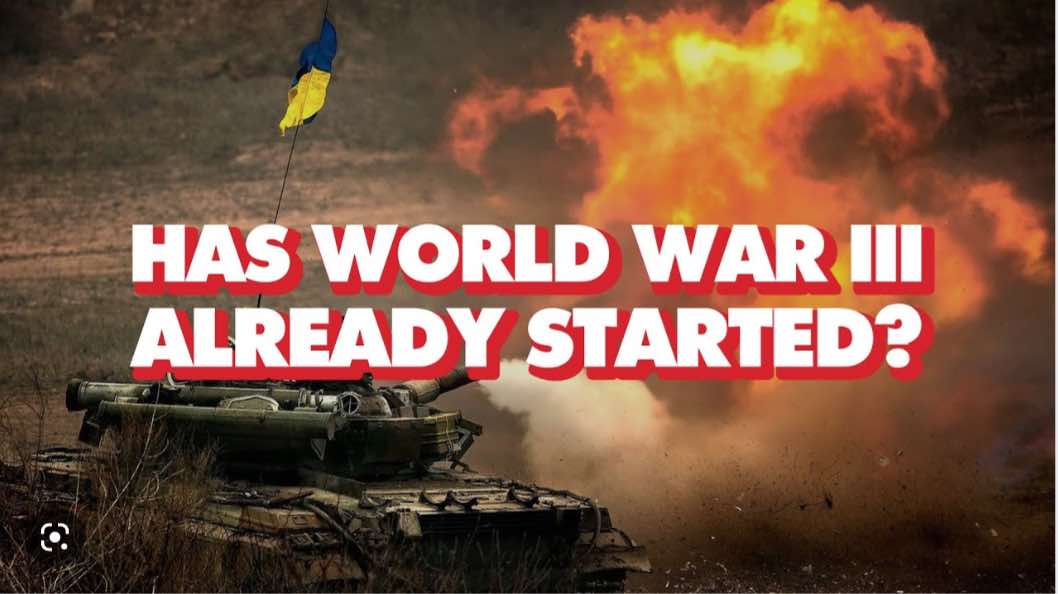 MAKE OF THIS WHAT YOU WILL

The French Le Figaro has an interview with the well known anthropologist Emmanuel Todd.

“The third world war has began” is his new thesis. Todd is quite famous for correctly predicting the devolution of the Soviet Union long before it happened. He was quite alone at that time.

Unfortunately the Figaro piece is paywalled. But Arnaud Bertrand has done us the favor of translating the gist. Here is his slightly edited thread:

He says “it’s obvious that the conflict, which started as a limited territorial war and is escalating to a global economic confrontation  between the whole of the West on the one hand and Russia and China on the other hand, has become a world war.”

He believes that “Putin made a big mistake early on, which is [that] on the eve of the war [everyone saw Ukraine] not as a fledgling democracy, but as a society in decay and a “failed state” in the making. […] I think the Kremlin’s calculation was that this decaying society would crumble at the first shock. But what we have discovered, on the contrary, is that a society in decomposition, if it is fed by external financial and military resources, can find in war a new type of balance, and even a horizon, a hope.”

He says he agrees with Mearsheimer’s analysis of the conflict: “Mearsheimer tells us that Ukraine, whose army had been overtaken by NATO soldiers (American, British and Polish) since at least 2014, was therefore a de facto member of the NATO, and that the Russians had announced that they would never tolerate Ukraine in NATO. From their point of view, the Russians are therefore in a war that is defensive and preventive. Mearsheimer added that we would have no reason to rejoice in the eventual difficulties of the Russians because since this is an existential question for them, the harder it would be, the harder they would strike. The analysis seems to hold true.”

He however has some criticism for Mearsheimer:

“Mearsheimer, like a good American, overestimates his country. He considers that, if for the Russians the war in Ukraine is existential, for the Americans it is basically only one ‘game’ of power among others. After Vietnam, Iraq and Afghanistan, what’s one more debacle? The basic axiom of American geopolitics is: ‘We can do whatever we want because we are sheltered, far away, between two oceans, nothing will ever happen to us’. Nothing would be existential for America.

If the Russian economy resisted the sanctions indefinitely and managed to exhaust the European economy, while it itself remained, backed by China, American monetary and financial controls of the world would collapse, and with them the possibility for United States to fund their huge trade deficit for nothing. This war has therefore become existential for the United States. No more than Russia, they cannot withdraw from the conflict, they cannot let go. This is why we are now in an endless war, in a confrontation whose outcome must be the collapse of one or the other.”

He firmly believes the US is in decline but sees it as bad news for the autonomy of vassal states:

“I have just read a book by S. Jaishankar, Indian Minister of Foreign Affairs (The India Way), published just before the war, who sees American weakness, who knows that the confrontation between China and the US will have no winner but will give space to a country like India, and to many others. I add: but not to Europeans. Everywhere we see the weakening of the US, but not in Europe and Japan because one of the effects of the retraction of the imperial system is that the United States strengthens its hold on its initial protectorates. As the American system shrinks, it weighs ever more heavily on the local elites of the protectorates (and I include all of Europe here). The first to lose all national autonomy will be (or already are) the English and the Australians. The Internet has produced human interaction with the US in the Anglosphere of such intensity that its academic, media and artistic elites are, so to speak, annexed. On the European continent we are somewhat protected by our national languages, but the fall in our autonomy is considerable, and rapid. Let’s remember the Iraq war, when Chirac, Schröder and Putin held joint anti-war press conferences.”

He underlines the importance of skills and education: “The US is now twice as populated as Russia (2.2 times in student age groups). But in the US only 7% are studying engineering, while in Russia it is 25%. Which means that with 2.2 times fewer people studying, Russia trains 30% more engineers. The US fills the gap with foreign students, but they’re mainly Indians and even more Chinese. This is not safe and is already decreasing. It is a dilemma of the American economy: it can only face competition from China by importing skilled Chinese labor.”

On the ideological and cultural aspects of the war: “When we see the Russian Duma pass even more repressive legislation on ‘LGBT propaganda’, we feel superior. I can feel that as an ordinary Westerner. But from a geopolitical point of view, if we think in terms of oft power, it is a mistake. On 75% of the planet, the kinship organization was patrilineal and one can sense a strong understanding of Russian attitudes. For the collective non-West, Russia affirms a reassuring moral conservatism.”

He continues: “The USSR had a certain form of soft power [but] communism basically horrified the whole Muslim world by its atheism and inspired nothing particular in India, outside of West Bengal and Kerala. However, today, Russia which repositioned itself as the archetype of the great power, not only anti-colonialist, but also patrilineal and conservative of traditional mores, can seduce much further. [For instance] it’s obvious that Putin’s Russia, having become morally conservative, has become sympathetic to the Saudis who I’m sure have a bit of a hard time with American debates over access for transgender women in the ladies’ room.

Western media are tragically funny, they keep saying, ‘Russia is isolated, Russia is isolated’. But when we look at the votes at the UN, we see that 75% of the world does not follow the West, which then seems very small.

With an anthropologist reading of this [divide between the West and the rest] we find that countries in the West often have a nuclear family structure with bilateral kinship systems, that is to say where male and female kinship are equivalent in the definition of the social status of the child. [Within the rest], with the bulk of the Afro-Euro-Asian mass, we find community and patrilineal family organizations. We then see that this conflict, described by our media as a conflict of political values, is at a deeper level a conflict of anthropological values. It is this unconscious aspect of the divide and this depth that make the confrontation dangerous.”

There you go. Is he right on everything? I don’t know, but Emmanuel Todd is certainly always a very singular and interesting thinker, with a vastly different analysis from the depressingly predictable bad takes that usually dominate French media.

SOURCEMichael Brenner via Kevin Barrett
ATTENTION READERS
Due to the nature of independent content, VT cannot guarantee content validity.
We ask you to Read Our Content Policy so a clear comprehension of VT's independent non-censored media is understood and given its proper place in the world of news, opinion and media.