Without its Armenian partner, Russia would lose the Caucasus (Georgia/Armenia/Azerbaijan) and the Caspian Sea — and possibly Turkic Central Asia — to pan-Turkism and NATO.  Pan-Turkic ideology parallels NATO’s own anti-Russian ideology and ambitions.

In contrast, even if Ukraine joined NATO, the Russian-NATO power balance would not change drastically.  Realistically, Europe and America aren’t about to launch a major, unprovoked attack on a nuclear/WMD-armed Russia.

The Turkey-Caucasus-Caspian-Central Asia belt, however, has long posed an existential challenge for its northern neighbor.

Though vulnerable to another Russian attack, Georgia remains a possible NATO candidate and Western darling.  It hosts Europe-bound gas and oil pipelines originating in Azerbaijan.  Georgia is also currently the West’s only path into/out of the Caucasus/Caspian.  Azerbaijan, an ally of Turkey and Israel, has fallen into line with Georgia.

Turkey and Azerbaijan (“Two countries, one nation”) closed their borders with Armenia three decades ago.  That left Christian — Apostolic, Catholic, and Evangelical — Armenia as the only physical obstacle to full U.S./NATO/Turkish penetration of Russia’s underbelly.  That explains much of why Moscow needs Yerevan and is obvious from glancing at a map.

Given its genocidal experiences with Turkey and Azerbaijan, Armenia has necessarily allied itself with Russia.  While Armenia prizes its independence, it must rely on Russia for its gas and oil, the operation of its nuclear power plant, weaponry, and more.

However, Armenian Prime Minister Nikol Pashinyan, elected/reelected in 2018/2021, has been friendlier with the West than have previous Armenian leaders.

That has angered Putin.  He now wants to totally dominate Russia’s ally lest America/NATO/Turkey knocks over the region’s remaining domino: Armenia. 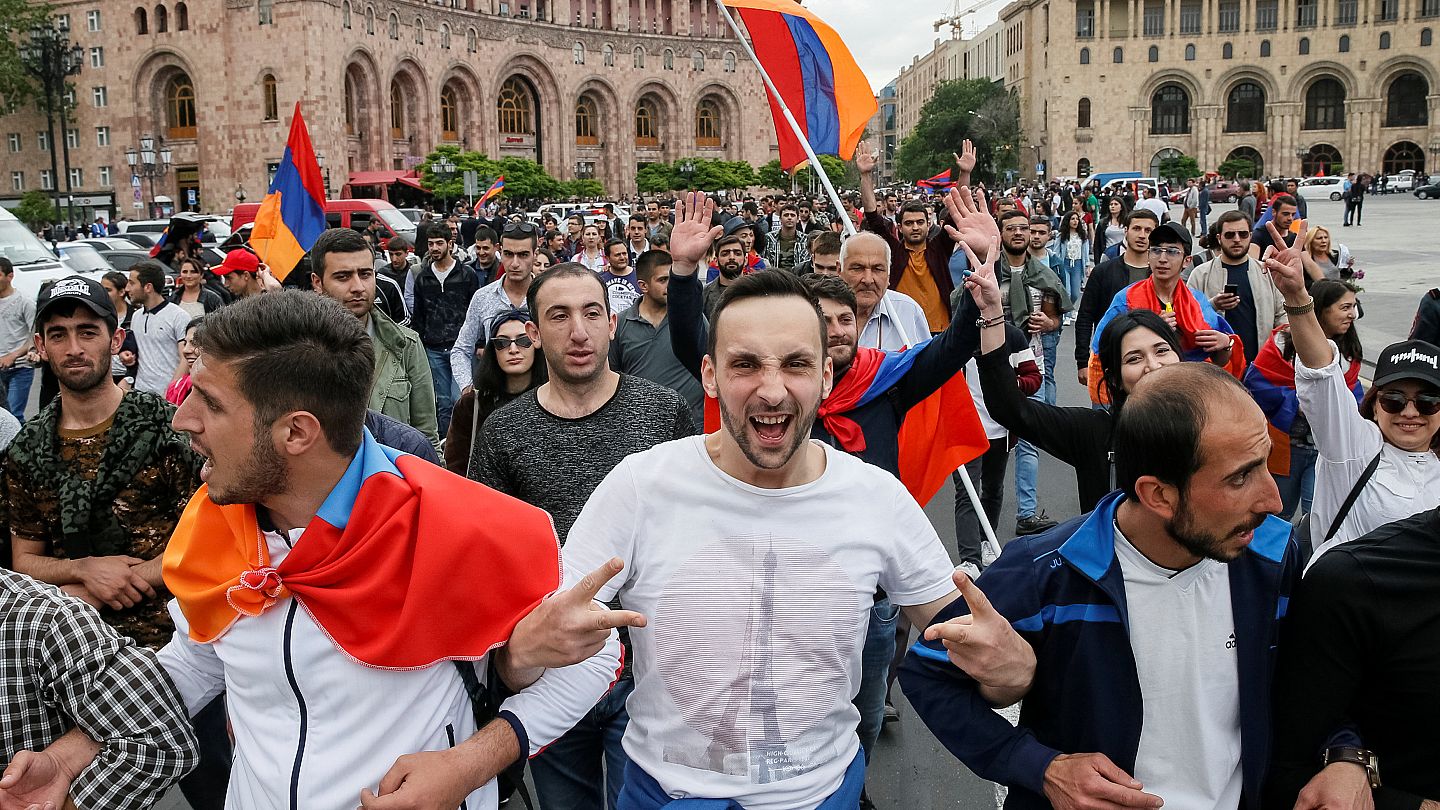 Around December 12, 2022, Azerbaijan initiated what has turned into a food, fuel, electricity, medical, and communications blockade of the 120,000 Christian Armenians of Artsakh [Nagorno-Karabagh].

Azerbaijan did so mainly by placing phony “demonstrators” on Artsakh’s only road to/from Armenia.

In the 1920s, Stalin maliciously assigned the ancient, Armenian-populated province of Artsakh to Azerbaijan as part of his divide-and-conquer strategy.  Prior to 1918, incidentally, no country named Azerbaijan had ever existed.

From 1991 to 2020, Armenia’s and Artsakh’s militaries successfully protected Artsakh against constant Azerbaijani attacks.  That changed in late 2020.  Armenians lost much of Artsakh due to deliberate Russian passivity and Turkey and Israel’s siding with Azerbaijan.

Baku now seeks not only to ethnically cleanse Artsakh but also, with Ankara’s backing, to seize huge swathes of Armenia itself.

However, it’s actually the 2000 armed Russian “peacekeepers” in Artsakh who are now the de facto blockaders of that province.

They could move the Azeri “demonstrators” out of the road in five minutes or allow an airlift of aid.  Putin could also end the blockade with one call to Azerbaijani dictator Ilham Aliyev. So why is Artsakh still under blockade?

Because Putin is holding Artsakh hostage to force Armenia — again, the obstacle to Western penetration — to totally capitulate to Russia.

Moscow probably also wants to inspire a coup against Pashinyan.  And all this despite Armenia’s having reliably befriended Russia for two hundred years.

And, no, Russia isn’t “too busy” or “preoccupied” with Ukraine.  That nonsense comes from uninformed/disingenuous Western commentators.

Moscow and the Russian-led CSTO military alliance (Armenia is a member) have been brazenly violating their defense agreements with Yerevan.  Since 2022, in fact, Russia/CSTO have openly and in-your-face let Azeri troops invade, occupy, and fortify sections of southeastern Armenia.

That, like the Russian blockade, is intended to cause Armenia grief and cede its independence to Russia.  That’s Putin’s style.

In addition, 2020’s unprovoked war against Artsakh and Armenia by Azerbaijan — joined by Turkey, its American F-16s, Israel, ISIS, and other terrorists — was clearly greenlighted by Moscow, which had halted previous major Azeri attacks.

This time, however, Putin intentionally waited until Artsakh and Armenia were on the ropes.  He then imposed a “ceasefire” that sent Russian “peacekeepers” (in reality, extortionists) into Artsakh and additional Russian troops into Armenia itself.

Where are your Western friends now?  Nowhere.  Russia will let Azerbaijan rain death and destruction down upon you, even though you’re our ally, as a lesson you’ll never forget.

It’s reminiscent of the taunt that Turks threw at Armenians during the Genocide of 1915-1923: “Let’s see your Jesus Christ come and save you now.”  Azerbaijan emulates Turkey by butchering Armenian women, summarily executing captured Armenian soldiers, and torturing Armenian prisoners of war.

Members of Congress, France, other countries, and human rights organizations have condemned the blockade of Artsakh.  But they’ve done little to materially help. Are Armenians less deserving of help than Ukrainians?

Armenia needs sophisticated arms, including drones and anti-drone systems.  The latter could counter Turkish drones (made with Western components) and Israeli drones.

The bottom line: Moscow is forcing Armenia to fully assimilate into Russia.  The latter would then have a permanent foothold in the Caucasus to checkmate the West.

The “ceasefire” of November 2020 says that “all economic and transport connections in the region shall be unblocked.”

Would that allow Western penetration of Armenia and, thus, the entire Caucasus?

Probably not.  Russia might have total control over Armenia by then. The West’s ability to use Armenia as a pathway would, therefore, be strictly limited.

Western commerce with the Caucasus/Caspian may also grind to a halt with a Russian invasion of Georgia that would sever the Europe-bound gas and oil pipelines.

Will the West come to regret its romance with Turkic mass murderers?  Will Russia someday regret its betrayal of Armenia?

David Boyajian’s primary foreign policy focus is the Caucasus. His work can be found at Armeniapedia (www.armeniapedia.org/wiki/David_Boyajian).

SOURCEArmeniaPedia.org
ATTENTION READERS
Due to the nature of independent content, VT cannot guarantee content validity.
We ask you to Read Our Content Policy so a clear comprehension of VT's independent non-censored media is understood and given its proper place in the world of news, opinion and media.