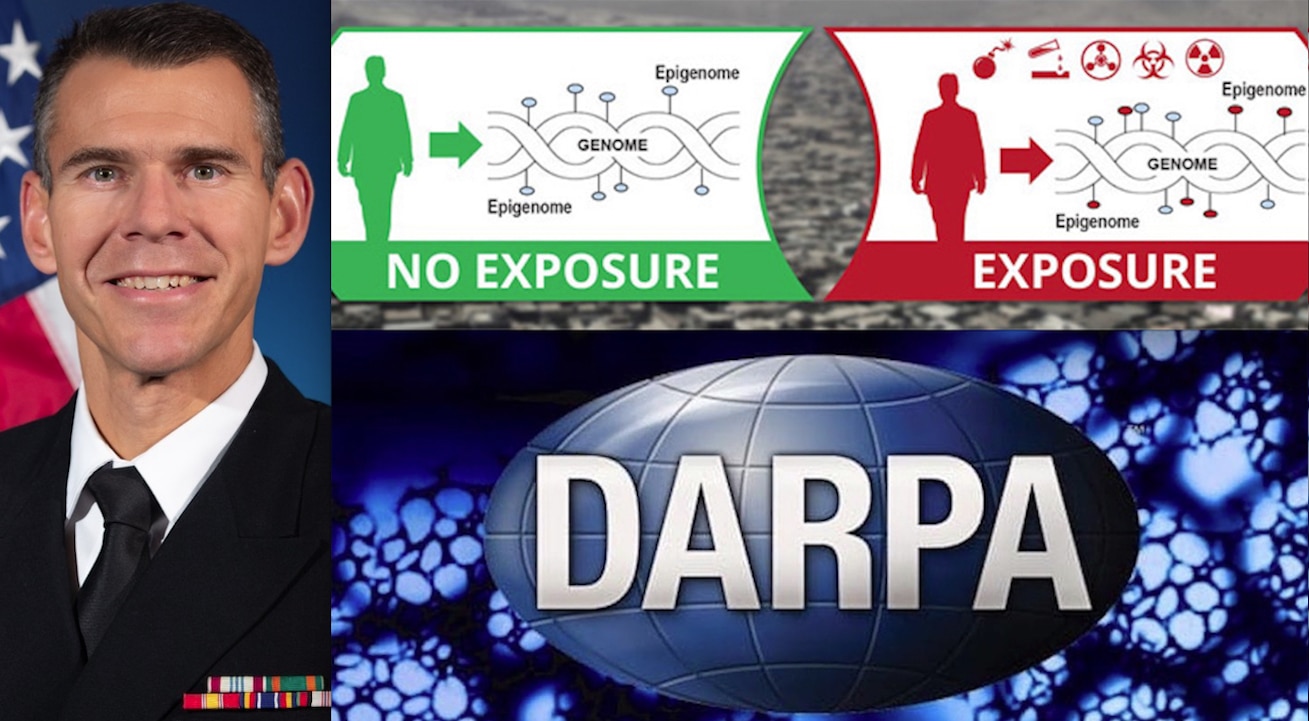 In the cover image the Navy doctor, Jean-Paul Chrétien, head of the DARPA Epigenetics project

«The Biological Technologies Office (BTO) of the Defense Advanced Research Projects Agency (DARPA) is sponsoring a Proposers Day for the planned proposer community in support of the Epigenetic CHaracterization and Observation (ECHO) program. DARPA is interested in diminishing the threat posed by state or non-state actor use of weapons of mass destruction (WMD) and improving diagnostics for troops who may have been exposed to threat agents. The ECHO program aims to develop technologies that enable the use of an individual’s epigenome to reveal their history of exposure to WMD and WMD precursors. The Proposers Day will be held on Friday February 23, 2018 at the ECC in Arlington, VA. Advanced registration is required».

This was the call launched almost 5 years ago by the Pentagon’s Defense Advanced Research Projects Agency (DARPA), the United States Department of Defense.

Thus began the hunt for the human genome to map the DNA genetic kit even before the same institution began research on the use of graphene for the neurocerebral control of humans but after having financed Big Pharma Moderna’s studies on genetically modified viruses in laboratory and those on mRNA gene serums against SARS which allowed the pharmaceutical company of Cambridge (Massachusetts, US), financed by the world emperor of vaccines Bill Gates, to develop an antidote against Covid-19 even 9 months before the official outbreak of the epidemic.

In a few lines we have highlighted why the project on Epigenetic Characterization and Observation is so topical.

But we will understand it even more in the next investigations that we will develop in a more or less in-depth way (with or without company names) according to the donations we will receive to be ready for any legal battles, as we explained in the introductory article to this dossier DARPA-GATES.

The investigation is so named for the too recurring role of Bill Gates in US civil and military government projects and joins the WuhanGates cycle which arrived in report no. 65 (in Italian version… the latest ones have to translate but can read in English with machine translation).

In fact, we already have evidence that the Pentagon military agency works with one of the most important producers of anti-Covid RT PCR swabs, thus legitimizing the suspicion that it is carrying out an enormous global hunt for human DNA, which could be useful not only for develop defense projects, such as more genetically calibrated vaccines, but also offensive projects such as biogenetic viruses on which the DTRA (Defense Threat Reduction Agency), the other Pentagon agency for threat reduction, has already worked in its bacteriological laboratories opened in all over the world and especially in Ukraine.

Precisely because we are writing about topics that could appear science fiction, we will limit ourselves to reporting what DARPA itself writes in relation to its ECHO project, adding only a few final considerations.

To develop its initiative, it began on February 23, 2018, it organized the first “proposers day” addressed to potential collaborators or contractors (contractors) “to provide potential executors with information on whether and how they could respond to government research and development requests and to increase ‘efficiency in the preparation and evaluation of proposals’.

Here is what we read on the official website of the ECHO project (link at the bottom of the page):

«The Epigenetic CHaracterization and Observation (ECHO) program aims to diminish the threat posed by weapons of mass destruction (WMD). To do this, the program is building a man-portable device that analyzes an individual’s epigenetic “fingerprint” to potentially reveal a detailed history of that individual’s exposure to WMD or their precursors. DARPA envisions that the same technology could provide rapid diagnostics for troops who may have been exposed to threat agents or who may be suffering from infections, providing a timely signal to apply effective medical countermeasures».

This is what the commander (CDR) Jean-Paul Chrétien of the Biological Technologies Office (BTO) writes. Chretien joined DARPA as a program manager in 2020. His interests include disease and injury prevention, operational medicine, and biothreat countermeasures.

Prior to coming to DARPA, Chretien led the Pandemic Warning Team at the Defense Intelligence Agency’s National Center for Medical Intelligence. A naval medical officer, his previous assignments include senior policy advisor for biodefense in the White House Office of Science and Technology Policy; team lead for Innovation & Evaluation at the Armed Forces Health Surveillance Branch; and director of force health protection for U.S. and NATO forces in southwestern Afghanistan.

«ECHO technology would work by quickly reading an individual’s epigenome — a part of human biology that helps our body respond to the constantly changing world around us — and identifying the epigenetic signatures indicative of WMD, precursor, or infectious disease exposure. Though a person’s underlying genetic code is stable, life events can leave discernible marks on the genome that modify how genes are expressed» added the DARPA Navy medical doctor.

«The epigenome is the combination of all such natural modifications, and while epigenetic modifications can register within seconds to minutes, they can potentially imprint the genome for decades, leaving a unique, time-stamped biography of an individual’s exposures».

«The ECHO system would read someone’s epigenome from a biological sample such as a finger prick or nasal swab, and conduct analysis to reveal possible exposure events even when other physical evidence has been erased. ECHO technology would offer an enormous advantage over state-of-the-art forensic and diagnostic screening technologies as it will identify the type of exposure and when it occurred — all without the need for trace amounts of the threat in the sample» highlighted dr. Chretien.

«They will have to create a device capable of performing multiple molecular analyses and onboard bioinformatics in 30 minutes or less, compared to an average of two days using current laboratory processes. By the end of the program, DARPA’s plans to demonstrate ECHO capabilities in a man-portable device that could be used by an operator in austere settings with only minimal training» concluded the Chretien’s plan..

Well this science fiction device would be tested on the population of the USA and the European Union by two leading companies in the field of genomics but also in the field of Covid swabs.

The massive diffusion of RT PCRs during the pandemic, although somewhat unreliable due to the high percentage of asymptomatic or potential false positives, would have been an exceptional opportunity to allow the Pentagon military agency to collect genetic material without the donor’s knowledge. .

We will soon reveal the other parts of the investigation… Follow Us in the Newsletter!

SOURCEgosd
ATTENTION READERS
Due to the nature of independent content, VT cannot guarantee content validity.
We ask you to Read Our Content Policy so a clear comprehension of VT's independent non-censored media is understood and given its proper place in the world of news, opinion and media.