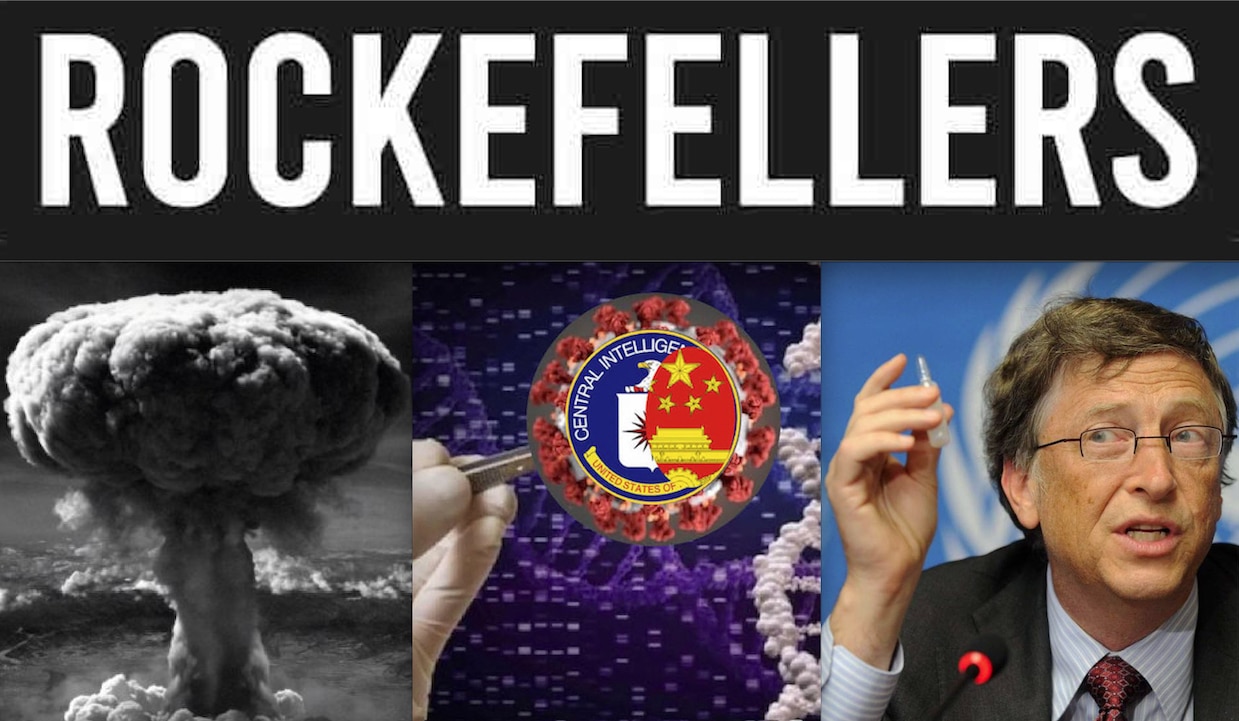 The story of the so-called QatarGate is only one another example of that moral lynching which has always been the most effective weapon of mass distraction used by Masonic potentates. Ever since the Illuminati of Bavaria organized the French Revolution with British Freemasonry with the help of the great Askenazi bankers of the Rothschilds.

They beheaded the kings and all their courtiers in order to lay the foundations, with the complicity of the ox people, of the Zionist Movement which has become one of the most powerful financial components in the triad of the New World Order with the Freemasons themselves and the military secret services, skilled in build various international terrorist movements or arm pre-existing ones.

THE TERRORISTS ARMED BY THE FREEMASONS OF THE NEW WORLD ORDER

The examples are countless and we mention only a few: the Jacobins of Robespierre’s Regime of Terror, the Thugs used by the British to defend the Indies Colonies from the legitimate rebel princes (who inspired the historical novels by Emilio Salgari on Sandokan, Mompracem’s Tiger), the secret societies of the fugitive terrorist Giuseppe Mazzini, the mobsters who helped the freemason guerrilla Giuseppe Garibaldi by favoring the birth of the MAFIA in Sicily, the Ku Klux Klan of the “pope” of American Freemasonry Albert Pike who favored the Civil War against the Union of Abraham Lincoln (later killed by a Freemason), the “mafiosi” of Lucky Luciano in the service of the US counterintelligence of the CIA (then OSS) for the landing of the Allies in Sicily, the Italian-American mafia families of New York who gave birth to the Syndicate of Crime also called Kosher Nostra due to its Zionist connotation, the subversive groups of the right and left such as Massimo Carminati Revolutionary Armed Nuclei mines or the Red Brigades of Renato Curcio who created the Strategy of Tension in Italy to justify the paramilitary Operation Gladio (StayBehind). As is happening today in Europe after the 2014 NATO coup in Kiev and the start of the war in Ukraine.

In the third millennium here is the birth of the Muslim Brotherhood in the Middle East, favored by Freemasonry, the jihadist terrorists of Al Qaeda created by the wealthy Osama Bin Laden, a friend of the rulers of Saudi Arabia, who were used by the CIA to inflame the war in the Balkans (today still at risk for Kosovo), the neo-Nazi extremists always cultivated by American intelligence in Ukraine until the birth of the ferocious Azov Battalion, commended by an undersecretary of the Meloni Government, and finally the ISIS created in Iraq and Syria by the caliph Al Baghdadi,released from a prison for terrorists by the US Army and considered a secret agent of the CIA and the Mossad.

Mossad is the notorious counterintelligence of Israel which brings us back to the Zionist Movement from which was born the new state acclaimed only by Askenazi politicians (called the “thirteenth tribe of Israel ” because it was born from the Khazars in Europe) but not from the true Orthodox Jews, custodians of the Israelite heritage who accept the divine condemnation of the Diaspora.

Bernard of Chartres said that we are like dwarfs who sit on the shoulders of giants, so that we can see many things even far beyond them, not because of the sharpness of our eyesight or because we are taller in build, but because we are lifted up and elevated of gigantic size.

Unfortunately, like it or not, today the West is sitting on the shoulders of the historical monsters that Freemasonry created by fomenting the first, second and third world wars, already underway, if we give weight to the words of Pope Francis who looks ongoing conflicts in the world, from the forgotten Syria to the touted Ukraine, as a “piecemeal third world war”.

It was in fact triggered two decades ago by the Bush “holy wars” in Iraq and Afghanistan, by Barack Obama’s Arab Spring, by George Soros’ color revolutions and by Bill Gates’ pandemics which only surfaced with the massacre from Covid-19 and related vaccines, for a SARS-Cov-2 built in a laboratory like the one in 2003, but planned since 1999 in complicity with the Rockefeller Foundation which now controls the rulers of half of the West (including those of the Giorgia Meloni’ s Italian Government).

However, if the living accomplices (see Kissinger who survived Queen Elizabeth II) and the heirs of this conspiracy of the New World Order projected towards a global totalitarian regime through  health, energy and financial tyrannies for the so-called Great Reset, are largely or minimally involved in or aware of what was narrated in the previous lines in an extremely concise historical excursus but analyzed in detail by dozens of Gospa News reports (link inside and at the bottom of the article) why be surprised that once again the moral lynching of QatarGate is being used as a weapon of mass distraction from the shameful speculation about Vaccinepolis, above all in EU, and international energy price hikes that could trigger a devastating financial pandemic?

While only Gospa News has highlighted that one of those arrested, former MEP Antonio Panzeri, was considered a trusted man on the so-called Soros List?

While all of the West kept silent about the funding diverted by the Qatari emirate to jihadist terrorist organizations in Syria and to Turkey to pay ISIS mercenaries in Libya well liked by NATO?

This long parenthesis was necessary to make many people ignorant of contemporary and geopolitical history understand the fertile humus in which the scandals artfully piloted by politics creep in with the same compliant media that kissed the buttocks of those who locked us up with useless lockdowns and fruitful only for the ‘Ndrangheta Italian mob (as attested by the reports of the Anti-Mafia Investigation Directorate) and by the mandatory Green Passes which made World War II descendants relive the intoxication of the Yellow Stars applied by Adolf Hitler’s Nazis to Jews sent to concentration on the rails built by the Rockefellers’ Standard Oil.

In addition to the aforementioned crimes against humanity plotted in Europe by the Rothschilds from the French Revolution to the State of Israel, the 3 largest mass holocausts in history orchestrated by the Rockefellers and left unpunished must be put into account by the NWO.

1 – The atomic bombs on Hiroshima and Nagasaki dropped by US President Harry S. Truman, the link between Freemasonry and the Council of Foreign Relations (CFR) first financed and then piloted by David Rockefeller (president from 1949–85): 166,000 casualties at Hiroshima and 80,000 casualties at Nagasaki. Beginning in 1939, the Council gained much greater prominence within the government and the State Department, when it instituted strictly confidential war studies funded entirely by the Rockefeller Foundation.

2 – The first Western legalization of abortion decided by the self-styled “Catholic” Nelson Rockefeller when he became Governor of the State of New York in 1970, the centenary of the breach of Porta Pia hatched by the Masonic army of the Kingdom of Italy against the Papal State. 42.9 million fetuses killed in 2021, 1 million in the US alone.

3 – The massacre of those infected by the SARS-Cov-2 bacteriological weapon and by vaccines built to protect themselves from it but functional above all to destroy the immune system of the weakest with the reactivation of viral and tumoral pathologies to create a functional “unnatural” selection to depopulation and the transhumanist transition towards eugenics already theorized by the Nazis and now prefigured by the invasive role of the Artificial Intelligence of the demigod Gates alongside the NATO military power.

At the moment 6.65 million deaths from Covid in the world (given in excess for many deceased from other causes) and over 74thousand deaths after the anti-Covid vaccination reported only in US and EU countries (given the increase is lower than the real one for thousands of sudden illnesses erroneously classified as natural deaths due to lack of autopsies).

It is in this truly diabolical and apocalyptic scenario, as well as horrendous and disgusting, that the weeds of Vaccinopolis were able to germinate from the scandal of 1991 in Italy for the bribes of Smith-Kline Beecham to the now Minister of Health Francesco De Lorenzo to the activity of lobbying of the Microsoft guru with EU and US politicians who are already renaming themselves PfizerGate and which we will discuss in a future article.

In the light of these recollections and reflections, the decision of the US, Germany and Italy to reject the resolution presented in recent days to the UN to condemn the glorification of Nazism really takes on a sinister connotation…

WUHAN-GATES – 60. NEW SCANDAL INTO WHO. French Co-Chair of Investigative Group on SARS-2 Worked in the China Bio-lab which Enhanced Coronavirus