As the war in Ukraine rages on, there is little doubt that the human cost has been enormous for Ukraine, including what is likely more than 100,000 soldiers who have died in combat operations. 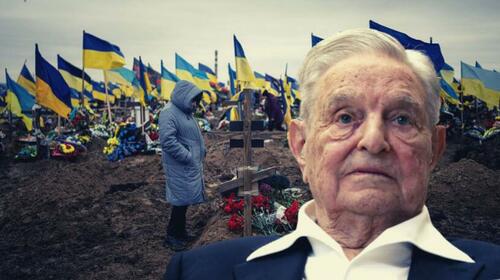 However, there was one man who predicted much of what has come to pass in the battle in the east of Europe: George Soros.

The billionaire oligarch financier, often portrayed as a humanist, promoted a hard-nosed geopolitical strategy in his 1993 piece entitled “Toward a New World Order: The Future of NATO.” 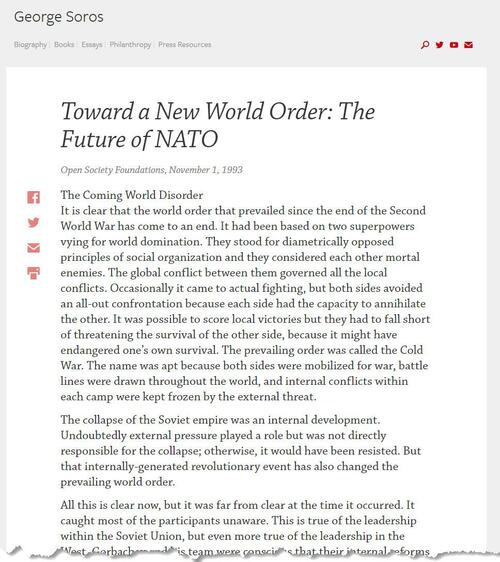 In the piece, he outlines how Eastern Europeans could be used as the “manpower” in coming conflicts in an effort to reduce the number of deaths in Western countries, which Soros argues the West would not politically tolerate, unlike the east of Europe.

“The United States would not be called upon to act as the policeman of the world. When it acts, it would act in conjunction with others. Incidentally, the combination of manpower from Eastern Europe with the technical capabilities of NATO would greatly enhance the military potential of the Partnership because it would reduce the risk of body bags for NATO countries, which is the main constraint on their willingness to act. This is a viable alternative to the looming world disorder,” wrote Soros in the article.

Soros acknowledges that the NATO countries have no appetite for “body bags,” but his statement implicitly indicates that Eastern Europeans can fill this role.

What Soros described appears to be unfolding exactly as he predicted regarding the war in Ukraine. Armed with high-end NATO weapons, Ukrainian soldiers are actively countering Russia, which Soros had already feared would become a nationalist nation opposed to the global order he was promoting in 1993. The powerful Western countries have the necessary weapons, and Ukraine has the manpower. Given that Soros already saw the potential of what this symbiotic match could produce on the battlefield decades in advance will likely bolster his reputation as a calculating — and perhaps ruthless — strategic thinker.

As Soros predicted, Ukrainian society appears to be tolerating the high death toll in its current conflict with Russia. During the Vietnam War, the U.S. lost 58,220 over the course of approximately 10 years, and yet, the war saw strong opposition from the American public. Despite a far higher death toll in a far shorter period of time, Ukrainian society has seen little in terms of protests.

The lack of protest in Ukraine may also be helped by the fact that Ukraine has suspended most of civil society, banned opposition parties and media, and even outlawed the Russian Orthodox Church. Another key factor in society’s perspective on the conflict is that the war is taking place on Ukrainian soil, which is a highly motivating factor for Ukrainian soldiers.

All those Ukrainian bodies, of course, have come with a major price tag for Russia, with the country’s cemeteries also filling up as quickly or even more so. Exact figures on casualties for either side remain unofficial and are likely inexact, but the war is costing both nations dearly in terms of life.

In the same article, Soros called for a “new world order.” The term is often derided in establishment media as a conspiracy theory, but Soros openly uses it. In addition, in the piece, the new world order he calls for is remarkably globalist and centralized. In other words, exactly the type of new world order critics of his, such as Hungarian Prime Minister Viktor Orbán, have been warning about for over a decade.

“Therefore, the only basis for action is collective security. And that is where the problem lies. The collapse of the Soviet empire has created a collective security problem of the utmost gravity. Without a new world order, there will be disorder; that much is clear. But who will act as the world’s policeman? That is the question that needs to be answered,” Soros wrote.

Soros outlines a number of his theories in the piece, referring to open and closed societies as well as the “theory of revolutionary change,” which he said he had also applied to financial markets. The billionaire describes how the dissolution of the Soviet Union presented new global security challenges but also opportunities.

The original mission was to defend the free world against the Soviet empire. That mission is obsolete; but the collapse of the Soviet empire has left a security vacuum which has the potential of turning into a “black hole.” This presents a different kind of threat than the Soviet empire did. There is no direct threat from the region to the NATO countries; the danger is within the region, and it concerns conditions within states as much as relationships between states. Therefore, if NATO has any mission at all, it is to project its power and influence into the region, and the mission is best defined in terms of open and closed societies.

Closed societies based on nationalist principles constitute a threat to security because they need an enemy, either outside or within. But the threat is very different in character from the one NATO was constructed to confront, and a very different approach is required to combat this threat. It involves the building of democratic states and open societies and embedding them in a structure which precludes certain kinds of behavior.

Soros also writes in his piece that NATO was racing to grant membership to countries in Central and Eastern Europe before “Russia recovers.” Soros appears to see NATO as actively transgressing against Russia during a time the country was still in chaos following the fall of communism.

“The countries of Central Europe are clamoring for full membership of NATO as soon as possible, preferably before Russia recovers. Russia objects, not because it harbors any designs on its former empire but because it sees no advantage in consenting. Its national pride has been hurt and it is sick and tired of making concessions without corresponding benefits,” writes Soros.

The billionaire activist also makes a number of other proposals in the piece, including offering NATO membership to Japan, his goal being the creation of a “new world order.”

“Japan should be asked to join NATO. Then we would have the beginnings of an architecture for a new world order. It is based on the United States as the remaining superpower and on open society as the organizing principle. It consists of a series of alliances, the most important of which is NATO and, through NATO, the Partnership for Peace which girds the Northern Hemisphere,” he writes.